Kenshiro is the main protagonist of the Fist of the North Star series. He appeared in the 90th episode of DEATH BATTLE!, Jotaro VS Kenshiro, where he fought against Jotaro Kujo from the JoJo's Bizarre Adventure series.

Kenshiro was originally an orphan and apparently a descendant of the Hokuto Sōke bloodline. As a baby he was adopted by a man named Ryuken, the 63rd successor of Hokuto Shinken style, who would name Ken after Ryuken's older brother: Kenshirō Kasumi as they both shared a Big-Dipper-shaped scar.

Kenshiro would watch his other adoptive brothers train in Hokuto Shinken, and one day even decided to join them.

This would eventually lead up to a fight to who would be Ryuken's successor, and despite how young and naive he was compared to the others he was an ultimately promising student and successfully earned the title of Ryuken's successor.

A nuclear war broke out and created a nuclear fallout, Ryuken died as well so Kenshiro ended up leaving with his fiancée Yuria to find a future for themselves in this new post-apocalyptic world. Unfortunately, some Lord named Shin from another rival school of Hokuto Shinken called Nanto Seiken decided to take Yuria for himself.

During this abduction, Shin was able to beat Kenshiro and give him the seven scars we see on his chest today. After a year of ravaging wastelands, Kenshiro would gain cunning and killer instincts needed for survival in this new world.

Kenshiro appeared in Season 2 of One Minute Melee, where he fought against his DEATH BATTLE! opponent Jotaro Kujo and lost.

Kenshiro appeared in Season 1 of DBX, where he fought against Saitama from the One-Punch Man series and ended in a draw. 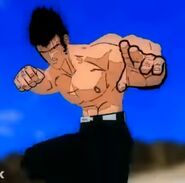 Chi Manipulation
Add a photo to this gallery

Retrieved from "https://deathbattle.fandom.com/wiki/Kenshiro?oldid=1049309"
Community content is available under CC-BY-SA unless otherwise noted.