King Dedede is a protagonist from the Kirby series. He appeared in the 108th episode of DEATH BATTLE!, Wario VS King Dedede, where he fought against Wario from the series of the same name and Super Mario series.

King Dedede is Kirby's archenemy, the greedy self-proclaimed king of Dream Land on the Planet Popstar. He is angry at Kirby for having all the residents of Cappy Town, taking his anger out on the townspeople. Despite having a mean disposition, he is a nice guy and has reluctantly accepted Kirby as the real hero of Dream Land as he would help him against a mutual enemy that threatens Dream Land.

King Dedede made a cameo at the end of Waddle Dee VS Goomba, as he played tennis with Bowser. While they played, their armies of Goombas and Waddle Dees went to war and tried to kill each other.

He appeared in Season 6 of One Minute Melee, where he fought against Bowser from the Super Mario series and lost.

King Dedede appeared in Season 1 of DBX where he fought against Amy Rose from the Sonic the Hedgehog series and won.

Sprite used in DBX, One Minute Melee and DEATH BATTLE! 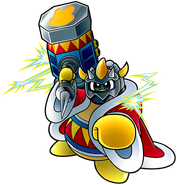 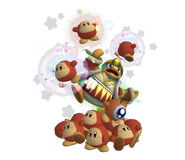 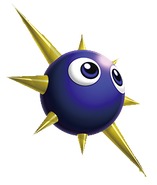 Star Hammer
Add a photo to this gallery

Retrieved from "https://deathbattle.fandom.com/wiki/King_Dedede?oldid=1041239"
Community content is available under CC-BY-SA unless otherwise noted.