Michael "Mickey" Mouse is a protagonist from the Kingdom Hearts series. To differentiate him from his classic Disney counterpart, he is commonly referred to as King Mickey. He appeared in the 140th episode and Season 8 Premiere of DEATH BATTLE!, Yoda VS King Mickey, where he fought against Yoda from the Star Wars series.

When he was young, Mickey worked as a deck hand with his captain, Pete. He and Pete sailed the steamboat Willie throughout Timeless River. This past association causes Pete to refer to Mickey as "the Boat-Boy King."

When Sora comes from the future using a door in the Hall of the Cornerstone, he, along with the future versions of Donald Duck and Goofy, mistake Mickey for being himself from the future. Four times, Mickey appears at scenes of trouble, either in peril (or appearing to be so), saving the day, or both. On one such occasion, his house is attacked by hordes of Heartless and a mini black hole that sucks up all his furniture. After each time Sora helps him out, Mickey shakes his hand and leads him to another scene of peril.

At some point, Mickey learns about the Keyblade and begins to train under Master Yen Sid, who takes him in as an apprentice. Sometime after he learned about the Keyblade, Mickey travels with Donald and Goofy to Country of the Musketeers to solve a problem, and the trio are assigned by Pete to be Princess Minnie's bodyguards. Though Pete makes the assignment because of Mickey's lack of qualifications as a musketeer and Pete's own plans to become king, Mickey and his friends successfully protect Minnie and foil Pete's plans. At some point after this, he becomes King of Disney Castle, with Minnie as his Queen. 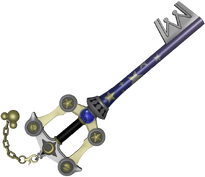 Ultima
Add a photo to this gallery

Retrieved from "https://deathbattle.fandom.com/wiki/King_Mickey?oldid=1126541"
Community content is available under CC-BY-SA unless otherwise noted.