Leon Scott Kennedy is one of the main protagonists of the Resident Evil series. He appeared in the 93rd episode of DEATH BATTLE!, Leon Kennedy VS Frank West, where he fought against Frank West from the Dead Rising series.

Leon's first experience with zombies came when he was late to his job at the Raccoon City Police Department and was in the middle of a zombie outbreak thanks to the T-Virus. After escaping from the incident, he became a U.S Government agent to defend against any bioterrorism threats from the Umbrella Corporation. 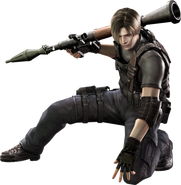 Leon with a RPG

Leon with a Sniper Rifle 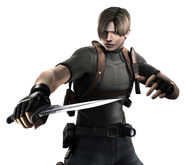 Leon with a knife
Add a photo to this gallery

Retrieved from "https://deathbattle.fandom.com/wiki/Leon_S._Kennedy?oldid=1009481"
Community content is available under CC-BY-SA unless otherwise noted.