Alexander "Lex" Luthor is a supervillain from DC Comics. He appeared in the 46th episode of DEATH BATTLE!, Iron Man VS Lex Luthor, where he fought against Iron Man from Marvel Comics.

Growing up in one of the worst places in Metropolis, Lex had a rough life until his parents' death (which he was responsible for) left him with their life insurance. He used that money to create Lexcorp and was a successful businesses man with some great publicity.

But when Superman came to Metropolis, Lex felt threatened by him as he could cause the human race to become weaker in comparison. He swore that he would get rid of the Man of Steel anyway he can.

While he prefers using trickery against his opponents, he only fights at a last resort. This is through both a kryptonite steroid usage, and the Warsuit, created by Darkseid.

Lex Luthor while campaigning for President

Lex Luthor in his Warsuit 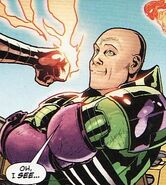 Kryptonite Axe
Add a photo to this gallery

Retrieved from "https://deathbattle.fandom.com/wiki/Lex_Luthor?oldid=1079595"
Community content is available under CC-BY-SA unless otherwise noted.