Lobo is an anti-hero from DC Comics. He appeared in the 113th episode of DEATH BATTLE!, Ghost Rider VS Lobo, where he fought against Ghost Rider from Marvel Comics.

When Lobo was born, his evil was so frighteningly apparent, the nurse who delivered him went insane and became the planet's first mental patient in ten millennia after the infant Lobo chewed off four of her fingers. Lobo knew he was one of a kind, but he wanted even more. Inspired by the idea of genocide, Lobo created a swarm of lethal scorpion-like creatures, he set them on his people wiping out his entire species but himself. He claimed it was a science project and gave himself an 'A'. Since then he has traveled the galaxies collecting bounties. Despite his ruthless nature, Lobo has a strict code of honor when it comes to these agreements. Along the way, he has met and battled a number of superheroes. 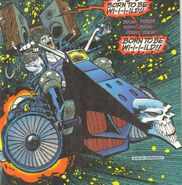 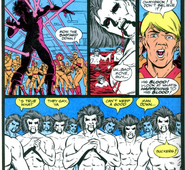 Crushing and devouring a city
Add a photo to this gallery

Retrieved from "https://deathbattle.fandom.com/wiki/Lobo?oldid=1063379"
Community content is available under CC-BY-SA unless otherwise noted.