Lucario is a creature from the Pokémon series. It appeared in the 80th episode of DEATH BATTLE!, Lucario VS Renamon, where it fought against Renamon from the Digimon series.

Lucario, the Aura Pokémon and the 448th Pokémon in the Pokédex, is a Fighting/Steel Type Pokémon which evolves from Riolu via friendship during daytime. They are rare and usually live on mountains far away from humans to train, but are extremely loyal and prideful once caught, with a natural sense of justice. They are able to manipulate an energy named Aura, which enables them to sense enemies or prey from afar, create projectiles and even communicate with humans via telepathy.

The most popular and commonly known Lucario belonged to Sir Aaron. Lucario was Sir Aaron's student, but when he tried to stop a war, Lucario followed him and was sealed in his staff, so that Lucario may not suffer the same fate Sir Aaron would, as he sacrificed himself to save the Tree of Beginning. Years later, Ash Ketchum would accidentally free Lucario, and together they would try to save the disturbed Tree of Beginning and Mew.

Lucario appeared in Season 1 of One Minute Melee, where it fought against its DEATH BATTLE! opponent Renamon, which ended with a draw.

Lucario appeared in Season 1 of DBX, where it fought against Ryu from the Street Fighter series and lost.

It returned in Season 5, where it fought against fellow Pokémon Blaziken and won.

Sprite used in One Minute Melee, DBX and DEATH BATTLE! 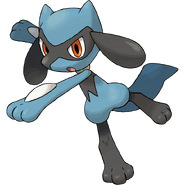 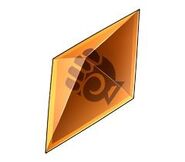 Fighting Z Crystal
Add a photo to this gallery

Retrieved from "https://deathbattle.fandom.com/wiki/Lucario?oldid=1073503"
Community content is available under CC-BY-SA unless otherwise noted.