Luke Skywalker is one of the main protagonists of the Star Wars series. He appeared in the 15th episode of DEATH BATTLE!, Luke Skywalker VS Harry Potter, where he fought against Harry Potter from the series of the same name.

Luke Skywalker was raised by his aunt and uncle on the desert planet of Tatooine, never knowing about his father. Just as his aunt and uncle were killed by Imperial troops, Jedi Master Obi-Wan Kenobi took Luke under his wing and trained him in the ways of the Force to help the Rebels fight against the tyrannical Empire. Luke eventually found out that his father, Anakin Skywalker, had been his archenemy Darth Vader, and made it his mission to stop the Empire and free his father from the dark side, both of which he succeeded in doing. 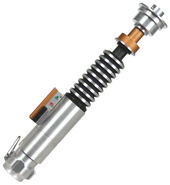 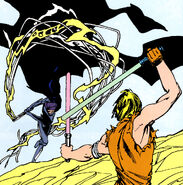 Luke using his shoto saber to combat the Sith Lumiya

Luke force choking guards
Add a photo to this gallery

Retrieved from "https://deathbattle.fandom.com/wiki/Luke_Skywalker?oldid=1122457"
Community content is available under CC-BY-SA unless otherwise noted.