M. Bison is the main antagonist of the Street Fighter series. He appeared in the 27th episode of DEATH BATTLE!, Shao Kahn VS M. Bison, where he fought against Shao Kahn from the Mortal Kombat series.

At a young age, M. Bison (known as Vega in Japan), murdered his parents and was found by a group of nomadic gypsies, who taught him how to utilize his soul power. In order to weaponize his soul even further, Bison removed the good part of his soul (which manifested itself into a woman named Rose) and developed his own technique with what he calls Psycho Power. He eventually founded and became the leader of the criminal regime known as Shadaloo.

M. Bison appeared in Season 4 of One Minute Melee, where he fought against God Rugal from the King of Fighters series and won. 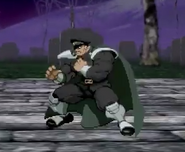 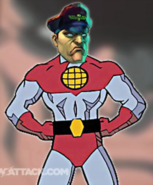 Psycho Crusher
Add a photo to this gallery

Retrieved from "https://deathbattle.fandom.com/wiki/M._Bison?oldid=1009494"
Community content is available under CC-BY-SA unless otherwise noted.