Majin Buu is a protagonist from the Dragon Ball series. He appeared in the 40th episode of DEATH BATTLE!, Kirby VS Majin Buu, where he fought against Kirby from the series of the same name.

A long time ago since the dawn of time, a pink monstrosity known as Majin Buu existed to destroy, until he was trapped in a Sealed Ball. It was discovered by the evil wizard, Bibidi. Bibidi released Buu in order to destroy the universe. After destroying planets, Bibidi went to Earth, dying before he arrived. Before he passed, he made a clone of himself called Babidi to complete his goal. Majin Buu turned out to be a complete lunatic, who would not listen to Babidi. While he was destructive at first, Buu was reformed by a man named Hercule Satan, and started helping the Z Fighters. 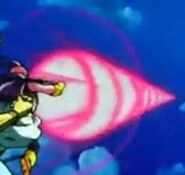 Planet Burst
Add a photo to this gallery

Retrieved from "https://deathbattle.fandom.com/wiki/Majin_Buu?oldid=1079769"
Community content is available under CC-BY-SA unless otherwise noted.