John-117, AKA Master Chief, is the main protagonist of the Halo series. He appeared in the 18th episode of DEATH BATTLE!, Master Chief VS Doomguy, where he fought against Doomguy from the Doom series.

In 2517, John was a six-year-old human living with his loving mother and father on the earth colony Eridanus II. One day, he was kidnapped by the UNSC and replaced by a clone to be a Spartan super soldier. His job was to help the UNSC in the intergalactic war against the Covenant, an army of dangerous aliens trying to turn on devices called Halos, which would destroy all organic life in the universe. In his training, he was said to be VERY lucky and had a great intellect. After his regular training, he was injected with a super steroid, boosting his health, speed, and reflexes dramatically, as well as making him 10x faster and stronger, both physically and mentally. After reaching the rank "Master Chief Petty Officer", he led the other Spartans to defend the humans from any threat and gained a full body, half ton armor suit that was near indestructible.

During Deadpool VS Pinkie Pie, Master Chief's helmet can be seen in the background on the set of DEATH BATTLE! Cast during Deadpool's invasion of the show.

Master Chief appeared in Season 1 of DBX, where he fought against Jango Fett from the Star Wars series and won.

He reappeared in Season 2, where he fought against Samus Aran from the Metroid series and lost.

Master Chief appeared in the third episode of Death Race, where he and an unnamed Spartan soldier raced in their Warthog against James Bond in his Aston Martin, the G-6155 Interceptor from Spy Hunter, and K.I.T.T. from Knight Rider.

They are supposedly eliminated the earliest from the race after Bond pops one of their tires and sends their car flying (a reference to the wonky physics of the Halo games), but it ends up sending them to the finish line and giving them first place. 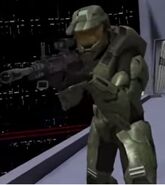 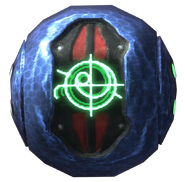 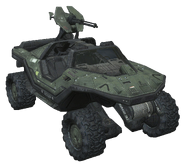 Warthog
Add a photo to this gallery

Retrieved from "https://deathbattle.fandom.com/wiki/Master_Chief?oldid=1129715"
Community content is available under CC-BY-SA unless otherwise noted.