Master Roshi is a protagonist from the Dragon Ball series. He appeared in the 102nd episode of DEATH BATTLE!, Roshi VS Jiraiya, where he fought against Jiraiya from the Naruto series.

At a young age, Roshi trained under many martial artists, eventually opening up his own martial arts school called the Turtle School, teaching a few students such as Gohan and Ox-King. Many years later, he would be the mentor of a few other martial artists such as Son Goku, Krillin, and Yamcha, teaching them techniques such as the Kamehameha.

Roshi makes a small cameo before the battle in Goku VS Superman, where he and the rest of the Z-Fighters are watching news about Superman on the TV at Kame House. He then informed Goku about the fact that Superman is an alien. 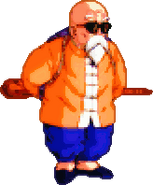 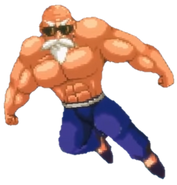 Retrieved from "https://deathbattle.fandom.com/wiki/Master_Roshi?oldid=1078976"
Community content is available under CC-BY-SA unless otherwise noted.