This article is about the Mega Man from the Mega Man X series. For other Mega Men, see Classic Mega Man, Mega Man Volnutt, MegaMan.EXE or Star Force Mega Man

Mega Man X is the main protagonist of the series of the same name. He appeared in the 105th episode of DEATH BATTLE!, Mega Man Battle Royale, where he fought against fellow Mega Men, Classic Mega Man, Mega Man Volnutt, MegaMan.EXE and Star Force Mega Man.

X is the final and possibly greatest creation of the now-deceased Dr. Light, designed as the first robot to feel, think, and make decisions like any human being. In order to test his ethics and ensure he does not cause any harm to other humans, Light sealed X away; he would eventually be discovered by Dr. Cain in the year 21XX, and his design would lead to the creation of similar robots, dubbed Reploids.

However, some Reploids, dubbed Mavericks would turn on their human creators, and a police force called the Maverick Hunters would be formed to stop such incidents, with X joining under the command of Sigma, alongside his new partner Zero. In time, Sigma would become Maverick himself, and it would be up to X to stop his schemes of destroying humankind.

X appeared as one of the outfit options Frank West was scrolling through from a video game arcade machine in his fight against Leon S. Kennedy. Frank uses his X-Buster to shoot at Leon, which blasts through a few zombies before it got blocked by Leon. The outfit isn't seen again after Frank is blown into a store by one of Leon's grenades.

X appeared in the Season 2 Premiere of DBX, where he fought against Iron Man from Marvel Comics and won.

X in his Ultimate Armor used in DEATH BATTLE!

X in his Ultimate Armor used in DBX 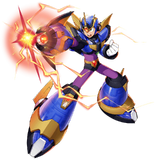 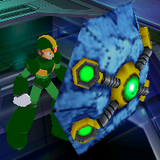 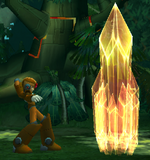 Soul Body
Add a photo to this gallery

Retrieved from "https://deathbattle.fandom.com/wiki/Mega_Man_X?oldid=1074150"
Community content is available under CC-BY-SA unless otherwise noted.