The Megazord, piloted by the Mighty Morphin Power Rangers, is one of the main protagonists of the Power Rangers series. It appeared in the 75th episode of DEATH BATTLE!, Power Rangers VS Voltron, where it fought against Voltron from the series of the same name.

When Rita Repulsa escaped from her space dumpster, Zordon and his robotic assistant recruited five teenagers with attitude to become the Power Rangers. The team consisted of Jason Lee Scott as the Red Ranger and leader, Zack Taylor the Black Ranger, Billy Cranston the Blue Ranger, Trini Kwan the Yellow Ranger, and Kimberly Hart the Pink Ranger. The five harnessed the power of the Power Coins that contain the spirit of the dinosaurs.

In emergencies, the rangers summon their Dino Zords. While each one is strong on their own, they can form the mighty Megazord in either Tank Mode or the humanoid Battle Mode. Armed with the Power Sword and Mastodon Shield, it's sure to defeat any monster.

The Thunder Megazord appeared in Season 3 of DBX, where it fought against the Burning Gundam from the Mobile Fighter G Gundam series and lost.

Note: These are the Power Rangers' quotes.

Jason the Red Ranger (and leader) 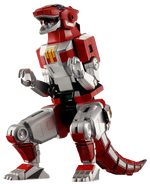 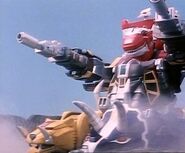 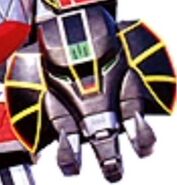 Mastodon Shield
Add a photo to this gallery

Retrieved from "https://deathbattle.fandom.com/wiki/Megazord?oldid=1073401"
Community content is available under CC-BY-SA unless otherwise noted.