While venturing through the mysterious Little Planet with Amy Rose on his tail, Sonic the Hedgehog came across a robotic doppelgänger of himself created by Dr. Eggman called "Metal Sonic", who was specifically designed to be better than the Blue Blur in every way. When they first met, Metal Sonic kidnapped Amy, prompting Sonic to give chase. After a race against Sonic on Stardust Speedway, Metal Sonic was defeated and Amy was saved. In the years that followed after his initial defeat, Metal Sonic would go on to prove himself as one of Sonic's greatest adversaries, either while working for Eggman or by his lonesome.

Metal Sonic appeared in Season 2 of One Minute Melee, where he 'fought' Bowser Jr. from the Super Mario series. However, immediately after the battle started, Mecha Sonic lunged at him from behind and proceeded to rip him apart. Mecha Sonic then fought Bowser Jr. in Metal's stead.

Metal Sonic appeared in Season 4 of DBX, where he fought against Mega Man from the series of the same name and lost.

Sprite used in 1st Appearance and One Minute Melee 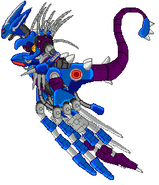 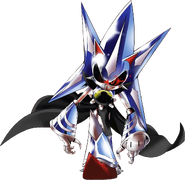 Metal Madness
Add a photo to this gallery

Retrieved from "https://deathbattle.fandom.com/wiki/Metal_Sonic?oldid=1077394"
Community content is available under CC-BY-SA unless otherwise noted.