Mewtwo is a creature from the Pokémon series. It appeared in the 63rd episode of DEATH BATTLE!, Mewtwo VS Shadow, where it fought against Shadow the Hedgehog from the Sonic the Hedgehog series.

Mewtwo was the result of a horrific DNA scientific experiment by Team Rocket's top scientist. Designed from an embryo of a pregnant Mew, Mewtwo was created to become the world's strongest Pokémon; however, Mewtwo turned on its creators and murdered everyone in the lab, making its escape. As a living creature, Mewtwo has a savage heart, and because of its altered genetics, all it can think about is defeating anything in its way; regardless of Pokémon or human.

Mewtwo unofficially appeared in a joke battle, where it "fought" against Vegeta from the Dragon Ball series. However, instead of actually fighting each other, both just ended up destroying Silvermania HQ and decided to drink a beer together.

Mewtwo appeared in Season 1 of One Minute Melee, where it fought against Frieza from the Dragon Ball series and lost.

It later made a cameo appearance in a Shadaloo Test Tube in M. Bison VS God Rugal.

It reappeared in Season 5, where it fought against Frieza again and lost yet again.

Mewtwo appeared in Season 4 of DBX, where it fought against Frieza from the Dragon Ball series and lost. 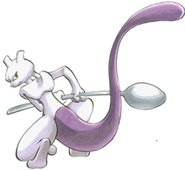 Mewtwo with its giant spoon

Aura Sphere
Add a photo to this gallery

Retrieved from "https://deathbattle.fandom.com/wiki/Mewtwo?oldid=1074172"
Community content is available under CC-BY-SA unless otherwise noted.