Might Guy is a protagonist from the Naruto series. He appeared in the 119th episode and Season 6 Finale of DEATH BATTLE!, All Might VS Might Guy, where he fought against All Might from the My Hero Academia series.

Guy is the son of Might Duy, who was known throughout Konoha as the "Eternal Genin". Unlike other ninja of the Hidden Leaf, Guy lacked talent in genjutsu and ninjutsu, resulting in the other students underestimating his abilities. Despite not passing the entrance exam, Guy was accepted into Konoha's Ninja Academy thanks to his exceptional talents in taijutsu, eventually becoming a Jōnin.

While teaching at the Academy, Guy heard about a student who could not perform genjutsu or ninjutsu named Rock Lee. Relating to the boy's struggles, Guy became his mentor and formed Team Guy with Neji Hyūga and Tenten to ensure that the next generation of Hidden Leaf trainees would become a splendid ninja. 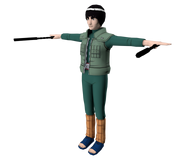 Night Guy
Add a photo to this gallery

Retrieved from "https://deathbattle.fandom.com/wiki/Might_Guy?oldid=1072705"
Community content is available under CC-BY-SA unless otherwise noted.