Michael "Mike" Haggar is one of the main protagonists of the Final Fight series. He appeared in the fifth episode of DEATH BATTLE!, Haggar VS Zangief, where he fought against Zangief from the Street Fighter series.

For many years, Michael "Mike" Haggar was a champion wrestler of Slam Masters until being elected mayor of Metro city, a metropolis overrun with street gangs. He and his friends Guy and Cody took on the Mad Gear Gang when they kidnapped Mike's daughter after he refused to cooperate. 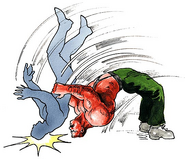 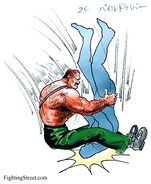 Retrieved from "https://deathbattle.fandom.com/wiki/Mike_Haggar?oldid=1009514"
Community content is available under CC-BY-SA unless otherwise noted.