This article is about Miles Morales. For the other heroes named Spider-Man, see Spider-Man or Spider-Man 2099

Miles Morales, AKA Spider-Man, is a superhero from Marvel Comics. He appeared in the 120th episode and Season 7 Premiere of DEATH BATTLE!, Miles Morales VS Static, where he fought against Static from DC Comics.

In Marvel's Ultimate Universe (Earth-1610), Aaron Davis aka the Prowler broke into the abandoned Osborn Industries shortly after Norman Osborn was arrested by S.H.I.E.L.D and publicly revealed as the Green Goblin. Unbeknownst to the thief, a spider genetically enhanced with the Oz Formula crawled into his bag.

Aaron's nephew, Miles Morales, visited his uncle after being awarded the final spot in a charter school lottery. At his uncle's apartment, Miles was bitten by the Oz-enhanced spider and received superhuman abilities like Peter Parker aka Spider-Man. Miles reacted negatively, as he just wanted to be normal, and decided to leave heroism to the actual Spider-Man. Months later, Miles witnessed Peter's death at the hands of the Green Goblin. Feeling guilty for not helping Peter before his demise, Miles decided to continue Peter's legacy and became the second Spider-Man. 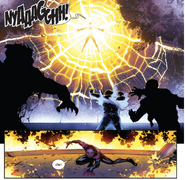 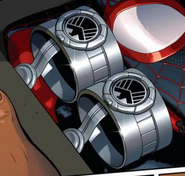 Web Shooters
Add a photo to this gallery

Retrieved from "https://deathbattle.fandom.com/wiki/Miles_Morales?oldid=1080969"
Community content is available under CC-BY-SA unless otherwise noted.