Mitsuru Kirijo is a protagonist from the Persona series. She appeared in the 110th episode of DEATH BATTLE!, Weiss VS Mitsuru, where she fought against Weiss Schnee from the RWBY series.

Born as the only child of Takeharu Kirijo, the head of the multinational trading company known as the Kirijo Group, Mitsuru was taught and raised to excel in education and athletics, becoming the valedictorian and student council president of Gekkoukan High School, as well as a member of its fencing club.

However, the Kirijo Group was also secretly researching Shadows, monsters that are born within the cognitions of people with distorted hearts and desires; an incident involving Shadows resulted in the death of Mitsuru's grandfather, the Group's original leader. Even from a young age, she was trained to utilize her Persona, a manifestation of one's desires to fight against tyranny and corruption; Mitsuru's Persona is Penthesilea of the Empress Arcana, who grants her the power to conjure ice in battle. To combat Shadows and protect the innocent from being harmed, Mitsuru helps form SEES (Special Extracurricular Execution Squad) at Gekkoukan, consisting of other Persona users.

During Dragonzord VS Mechagodzilla, an artwork of Mitsuru drawn by Kristina Jean can be seen in Akane Yashiro's cockpit as she was about to crash.

Artwork of Mitsuru as seen in Dragonzord VS Mechagodzilla 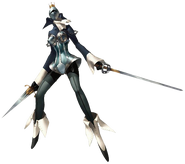 Mitsuru's sword
Add a photo to this gallery

Retrieved from "https://deathbattle.fandom.com/wiki/Mitsuru_Kirijo?oldid=1048429"
Community content is available under CC-BY-SA unless otherwise noted.