Shigeo Kageyama, AKA Mob, is the main protagonist of the Mob Psycho 100 series. He appeared in the 117th episode of DEATH BATTLE!, Mob VS Tatsumaki, where he fought against Tatsumaki from the One-Punch Man series.

Before meeting his master, Arataka Reigen, eight-year-old Shigeo Kageyama is an average middle school boy who was nicknamed Mob because of his lack of a sense in presence. He could tap into his inner wellspring of mental prowess, but he was frightened of his own abilities though as he realizes the potential risk of his powers and accomplishments and was looking for a guiding force to follow. He soon learned from both Reigen and his childhood crush, Takane Tsubomi, that his psychic ability did not make him inherently greater than anyone else. He also learned that psychic ability should not be used against other people. This philosophy leads him to where he is currently and is one of the many defining traits of his. With his emotions suppressed and growing inside Mob little by little, his power threatens to break through its limits as he eventually encounters other espers like the criminal group, Claw.

Mob appeared in Season 5 of One Minute Melee, where he fought against his DEATH BATTLE! opponent Tatsumaki and won. 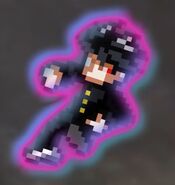 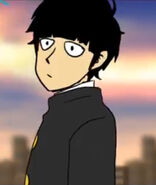 Chlorokinesis
Add a photo to this gallery

Retrieved from "https://deathbattle.fandom.com/wiki/Mob?oldid=1073485"
Community content is available under CC-BY-SA unless otherwise noted.