Namor McKenzie is an anti-hero from Marvel Comics. He appeared in the 104th episode and Season 6 Premiere of DEATH BATTLE!, Aquaman VS Namor, where he fought against Aquaman from DC Comics.

Namor was born in the capital city of the initially unnamed Atlantean empire, then located off the Antarctic coast. His mother was Emperor Thakorr's daughter, Fen, and his father an American sea captain, Leonard McKenzie, of the icebreaker Oracle; they had fallen in love and married aboard ship while she was, unbeknownst to him, spying on the human intruders.

When Fen did not return, Atlantean warriors attacked the Oracle, evidently killing McKenzie, and returned Fen to her kingdom. The pink-skinned mutant Namor was subsequently born among the blue-skinned Atlanteans. He became the Prince of Atlantis, and a warrior for his people against the "surface-dwellers." 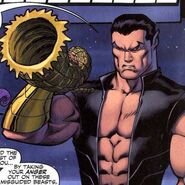 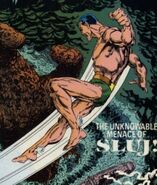 Giganto
Add a photo to this gallery

Retrieved from "https://deathbattle.fandom.com/wiki/Namor?oldid=1063534"
Community content is available under CC-BY-SA unless otherwise noted.