The Hero of the Hidden Leaf

Dawn M. Bennett
If you don't like your destiny, don't accept it. Instead, have the courage to change it the way you want it to be!

Hokage Naruto Uzumaki is the main protagonist of the Naruto series. He appeared in the 85th episode of Death Battle, Naruto VS Ichigo, where he and Kurama fought against Ichigo Kurosaki from the Bleach series.

When Naruto was born, his parents sealed away Kurama, the Nine-Tails, inside of him to keep it from rampaging. Unfortunately, it made him an outcast around the citizens of Konoha and he used pranks and mischief as a way to get recognition. He eventually made a goal of becoming Hokage so people would finally respect him.

Once he became a Genin and a part of Team 7 however, Naruto began to realize how much being part of a team helped him from loneliness and soon grew into a more mature man and desire to help people as his Ninpo way.

He was instrumental in winning the 4th Shinobi War, and eventually in his adult life realized his dream and became the 7th Hokage of Konoha.

For an article covering Naruto's appearance in DBX, visit the DBX Wiki.

Naruto made a cameo at the beginning of Sasuke VS Ichigo in Season 3, where he and Sasuke can be seen fighting against Kaguya before she teleported Sasuke away.

He later made another cameo appearance in the beginning of the Season 4 Finale of DBX, Batman VS Iron Man, where he can be seen bidding in the auction to buy Piccolo to play his father and being shocked that his son Boruto would bid as well.

Naruto appeared in Season 6 of DBX, where he fought against Ryu Hayabusa from the Ninja Gaiden and Dead or Alive series and won. 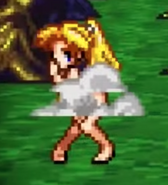 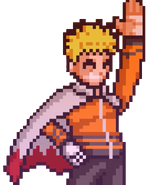 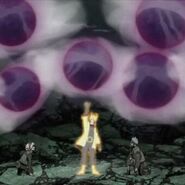 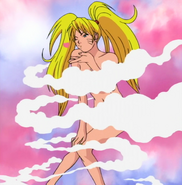