Natsu Dragneel is the main protagonist of the Fairy Tail series. He appeared in the 76th episode of DEATH BATTLE!, Natsu VS Ace, where he fought against Portgas D. Ace from the One Piece series.

400 years ago, Natsu was born as the younger brother of Zeref, however, he died at a young age alongside their parents, courtesy of a Dragon attack. This caused Zeref to research Magic and its relation to life and death and, much later, with Zeref using his dead body, he was revived as the strongest Demon: E.N.D; whose purpose was to kill Zeref. As E.N.D., Natsu was a Demon specializing in fire, and purportedly discovered a different route that Magic could take when it was still developing and thus created Curses. During this time he also met Igneel. However, the Dragon chose not to kill him because he loved him extremely so. Igneel, the King of the Fire Dragons, raised the young child as his own son.

Igneel taught Natsu to speak, write and use his very own form of Lost Magic, Fire Dragon Slayer magic. Eventually, Igneel sealed his damaged soul inside Natsu's body and, along with four other Dragons and their Dragon Slayers, jumped 400 years into the future via Eclipse Gate While initially thought to have been abandoned by Igneel on July 7, X777, Igneel, July 7, X777 was the day and year he awoke in the future, like the other four Dragon Slayers; however, when Natsu woke, he believed that Igneel had abandoned him, not knowing that he had instead opted to reside inside his body for many years to come. After waking up, Natsu left on a quest to find Igneel and was eventually found by the Guild Master of Fairy Tail: Makarov Dreyar. And so, Natsu joined Fairy Tail.

7 years later he met a girl named Lucy Heartfilia in Hargeon Town who aspired to join Fairy Tail. After rescuing her from some bandits, later on, he took her to his guild where they formed a team, and have gone on numerous adventures ever since.

Natsu appeared in Season 3 of One Minute Melee, where he fought against his DEATH BATTLE! opponent Portgas D. Ace and lost.

Natsu appeared in Season 3 of DBX, where he fought against Iceman from Marvel Comics and lost. 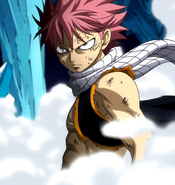 Natsu consuming Flames
Add a photo to this gallery

Retrieved from "https://deathbattle.fandom.com/wiki/Natsu_Dragneel?oldid=1066040"
Community content is available under CC-BY-SA unless otherwise noted.