Richard "Dick" Grayson, AKA Nightwing, is a superhero from DC Comics. He appeared in the 99th episode of DEATH BATTLE!, Nightwing VS Daredevil, where he fought against Daredevil from Marvel Comics.

As a boy, Dick Grayson was a trapeze performer along with his parents as the "Flying Graysons". However, he tragically lost his parents when a gangster sabotaged his parents' trapeze wires. Now an orphan, Dick was adopted by Bruce Wayne, and when he learned that the latter was Batman, he became Robin, the Boy Wonder, and sidekick to Batman.

As Dick grew older, he started to resent the title of the Boy Wonder, and eventually parted ways with Bruce. Traveling to Bludhaven, Dick became his own superhero, Nightwing, and became the protector of that city, while occasionally coming back to Gotham to support Batman.

The Burt Ward version of Robin appeared in the series premiere of Death Race, where he drove alongside the Adam West Batman in their Batmobile and won. During the race, he launched a "Bat-Nuke" that destroyed the Arkham Batmobile. 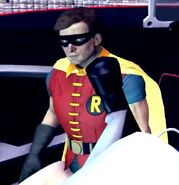 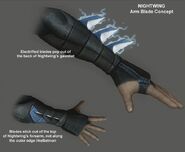 Dick Grayson as Batman
Add a photo to this gallery

Retrieved from "https://deathbattle.fandom.com/wiki/Nightwing?oldid=1073407"
Community content is available under CC-BY-SA unless otherwise noted.