Obi-Wan Kenobi is a protagonist from the Star Wars series. He appeared in the 127th episode of DEATH BATTLE!, Obi-Wan Kenobi VS Kakashi, where he fought against Kakashi Hatake from the Naruto series.

The Force-sensitive Obi-Wan Kenobi was taken from his family at a very young age and brought to the Jedi Temple for training. After training from Grand Master Yoda, he was eventually assigned to be the Padawan of Jedi Master Qui-Gon Jinn. During a mission to defeat the corrupt Trade Federation, the two met a young slave named Anakin Skywalker on Tatooine. Qui-Gon believed Anakin to be the Chosen One prophesied to bring balance to the Force.

After Qui-Gon's death at the hands of Darth Maul, Obi-Wan promised to fulfill his master's dying wish to train Anakin to become a Jedi Knight despite the Jedi Council's objections. He shared a close bond with his new apprentice as the two went on many adventures and served as Generals in the Clone Wars. However, he was forced to duel his former pupil when Anakin turned to the Dark Side and became Darth Vader. He then exiled himself to Tatooine and vowed to protect the galaxy's future savior and Anakin's son, Luke Skywalker. 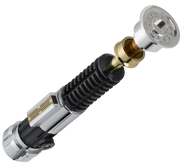 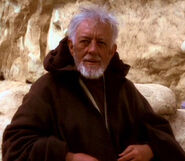 Using the Force to heal

Obi-wan's Jedi Starfighter
Add a photo to this gallery

Retrieved from "https://deathbattle.fandom.com/wiki/Obi-Wan_Kenobi?oldid=1063146"
Community content is available under CC-BY-SA unless otherwise noted.