Optimus Prime is the main protagonist of the Transformers series. He appeared in the 98th episode of DEATH BATTLE!, Optimus Prime VS Gundam, where he fought against the RX-78-2 Gundam from the Mobile Suit Gundam series.

Optimus Prime is the awe-inspiring leader of the Autobot forces. Selfless and endlessly courageous, he is the complete opposite of his mortal enemy Megatron. Originally a mere civilian dock-worker named Orion Pax, he was chosen by the Matrix of Leadership to become a Prime, the first in a number of heavy burdens he has been forced to bear. Another is his bringing of the Transformers' conflict to Earth. Every casualty, human or Cybertronian, weighs heavily on his spark. He does not show this side to his soldiers, and he never succumbs to despair. The Autobots need a decisive, charismatic leader, and that is what he gives them. It was that leadership which turned the tide of the Great War.

On the battlefield, there are few who rival Optimus Prime's prowess. He is easily the strongest of any Autobot his size, and his ion blaster and his energon-axe are deadly weapons. He would sacrifice his life to protect his fellow Autobots or those under their care, and does so on a regular basis. His compassion for other sentient beings is his only real weakness, and one the Decepticons have taken advantage of time and again... though it's also the source of his strength!

Optimus makes a small cameo appearance during Thanos VS Darkseid, as he can be seen when Thanos tilts the world to it's side using the Reality Stone among the falling vehicles in his truck form.

Optimus appeared in Season 1 of Death Race, where he raced against the Flying Ford Anglia (driven by Harry Potter and Ron Weasley) from the Harry Potter series, Thomas the Tank Engine from the Thomas & Friends series and Lightning McQueen from the Cars series.

After transforming from his truck form, he ended up eliminating Thomas the Tank Engine and Lightning McQueen, giving him the victory. However, because he won with pure luck and brutality, he ended up committing suicide after the race. He was voiced by Kamran Nikhad. 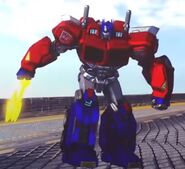 Optimus' cameo in Thanos vs Darkseid

The Matrix of Leadership
Add a photo to this gallery

Retrieved from "https://deathbattle.fandom.com/wiki/Optimus_Prime?oldid=1121926"
Community content is available under CC-BY-SA unless otherwise noted.