Pit is the main protagonist of the Kid Icarus series. He appeared in the 92nd episode of DEATH BATTLE!, Sora VS Pit, where he fought against Sora from the Kingdom Hearts series.

Pit was a young angel boy, trapped in the Underworld. Then he was entrusted with a magical bow from the imprisoned Goddess of Light, Palutena as well as a mission. Defeat the lord of the underworld, Medusa and save Angel Land. Naturally, he succeeds and becomes captain of Palutena's royal bodyguards. 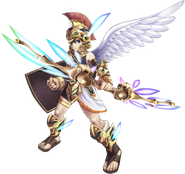 Using Arrow of Light
Add a photo to this gallery

Retrieved from "https://deathbattle.fandom.com/wiki/Pit?oldid=1057733"
Community content is available under CC-BY-SA unless otherwise noted.