Portgas D. Ace is a protagonist from the One Piece series. He appeared in the 76th episode of DEATH BATTLE!, Natsu VS Ace, where he fought against Natsu Dragneel from the Fairy Tail series.

The son of the late Pirate King Gol D. Roger, Ace was left in care by bandit Curly Dadan in order to have a normal life. He was a rambunctious kid who would later befriend Sabo and Luffy as honorary brothers.

When he turned 17, Ace left to the seas to become a pirate, and founded the Spade Pirates as the captain. He would later integrate his crew to the Whitebeard Pirates crew and became Whitebeard's 2nd division captain. At one point in his life, he ate the Flame-Flame Fruit, and obtained the power of fire.

Ace appeared in Season 3 of One Minute Melee, where he fought against his DEATH BATTLE! opponent Natsu Dragneel and won. 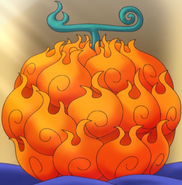 Flame Emperor
Add a photo to this gallery

Retrieved from "https://deathbattle.fandom.com/wiki/Portgas_D._Ace?oldid=1077827"
Community content is available under CC-BY-SA unless otherwise noted.