Princess Peach Toadstool is a protagonist from the Super Mario series. She appeared in the 20th episode of DEATH BATTLE!, Zelda VS Peach, where she fought against Princess Zelda from the The Legend of Zelda series.

A descendant of the Toadstool family, Princess Peach is typically your standard meek and helpless princess, which is accurate considering she's been kidnapped many times. However, on her own, she can use her vast arsenal to defeat enemies.

Peach made a brief appearance during the fight between Haggar and Zangief, where Peach was thrown out of a building along with a Dragon Ball, Big the Cat and Pedobear.

Princess Peach made a cameo in the DBX episode Mario VS Luigi, where she and Yoshi watched the Mario Bros. play tennis before the fight began.

Princess Peach with her umbrella, Perry the Parasol 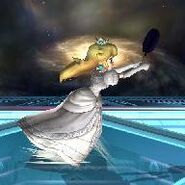 Peach with her Frying Pan

Peach pulling a turnip out of the ground 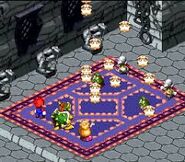 Therapy Healing Spell
Add a photo to this gallery

Retrieved from "https://deathbattle.fandom.com/wiki/Princess_Peach?oldid=1059984"
Community content is available under CC-BY-SA unless otherwise noted.