Ragna the Bloodedge is the main protagonist of the BlazBlue series. He appeared in the 41st episode of DEATH BATTLE!, Ragna VS Sol Badguy, where he fought against Sol Badguy from the Guilty Gear series.

Also known as the Grim Reaper, Ragna is feared by the Novus Orbis Librarium for being the most powerful individual to have ever rebelled against them since the Ikaruga Civil War. His actions, which included destroying countless number of their branches, have labeled him the most wanted criminal and caused him to receive the largest bounty ever in the history of the NOL. He possesses a powerful form of Ars Magus called the Azure Grimoire, or simply referred to as the titular BlazBlue, which is often either the secondary or primary target of those after him and his bounty. His ultimate goal is to destroy the NOL, for he blames them for destroying his family. He is Jin Kisaragi's biological brother, whose rivalry with him stems from an incident that happened when their sister, Saya was presumably killed. His right arm is mechanical because his real one was cut off by Yūki Terumi, who had taken control of Jin's mind. He was resurrected by Rachel Alucard as a Dhampir, causing one of his green eyes to turn red and his once-blond hair to white. The BlazBlue he possesses is only a fragment of an imitation; the true Grimoire is actually destined to be wielded by Noel Vermillion.

The handle "Bloodedge" refers to the red jacket and sword given to Ragna by Jubei before he left; both items belonged to an obscure warrior named Bloodedge, who fought the Black Beast in order to protect humanity long enough for the Six Heroes to develop the Ars Magus technology. Jubei called him a friend and a true hero, and Ragna took on the title as Jubei saw him as a student of great potential. In the beginning events of Continuum Shift, Ragna has taken Noel into his care, and starts caring for her much like he did with his sister, Saya.

Ragna's fight with Sol was briefly seen in Chuck Norris VS Segata Sanshiro when the two martial artists clashed.

Ragna appeared in Season 1 of One Minute Melee, where he fought against Dante from the Devil May Cry series and won. He had his alternate color on, likely due to his default color looking very similar to Dante.

Ragna appeared in Season 3 of DBX, where he fought against Ruby Rose from the RWBY series and lost.

Ragna later made a cameo appearance in the beginning of the Season 4 Finale of DBX, Batman VS Iron Man, where he can be seen in the crowd during the auction. 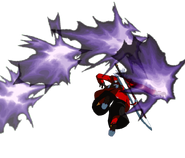 The Black Beast
Add a photo to this gallery

Retrieved from "https://deathbattle.fandom.com/wiki/Ragna_the_Bloodedge?oldid=1009994"
Community content is available under CC-BY-SA unless otherwise noted.