Rainbow Dash is one of the main protagonists of the My Little Pony: Friendship is Magic series. She appeared in the 17th episode of DEATH BATTLE!, Starscream VS Rainbow Dash, where she fought against Starscream from the Transformers series.

Rainbow Dash is a cocky and impatient yet loyal, blue pegasus, a pony with wings, who can control weather, which she does from Cloudsdale, a city in the sky. She is a weather patroller of Ponyville. As of the episode Newbie Dash, Rainbow Dash is now a member of the Wonderbolts.

Rainbow Dash made a quick cameo in the aftermath of Raven VS Twilight Sparkle in which she was seen putting out the fire at the Golden Oak Library by stomping on a few clouds and making it rain. At the beginning of the fight, Raven was also seen playing with My Little Pony dolls of the main characters, one of which included Rainbow Dash. 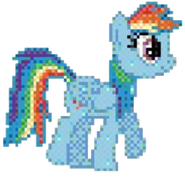 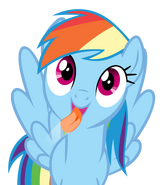 Rainbow Dash teasing that was used in her DEATH BATTLE!

Retrieved from "https://deathbattle.fandom.com/wiki/Rainbow_Dash?oldid=1079551"
Community content is available under CC-BY-SA unless otherwise noted.