Raphael was a pet turtle along with three others who had been bought by a boy, but the boy tripped and the four turtles fell into a sewer drain. At the time, Hamato Yoshi had been hiding in the sewer from his enemy, Oroku Saki, and had become a friend of the rats living down there. Hamato was overjoyed to find four new friends and welcomed the turtles into his home. At some point after, Hamato noticed the turtles covered in a glowing substance, and he touched the substance himself. The turtles had most recently touched Yoshi, causing them to quickly evolve into humanlike turtles. Hamato, having just been exposed to the rats, became a human rat. Hamato saw the turtles' potential to challenge the one responsible for the mutations to change him back to a human, and trained them in the art of ninjutsu, and naming them after some of his favorite Renaissance artists – Michelangelo, Leonardo, Raphael, and Donatello. Raphael was given a red mask, uses two sai, and is the tough guy of the team. While this makes him one of the more dangerous of the four, his hot-headedness has led him into trouble on multiple occasions.

Raphael appeared in Season 2 of DBX, where he fought against Wolverine from Marvel Comics and lost. 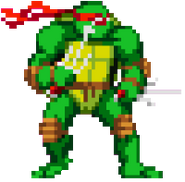 Raphael's Sais
Add a photo to this gallery

Retrieved from "https://deathbattle.fandom.com/wiki/Raphael?oldid=1073908"
Community content is available under CC-BY-SA unless otherwise noted.