Ratchet is a Lombax, originally born on the Lombax homeworld of Planet Fastoon in the Polaris Galaxy but later sent to Planet Veldin in the Solana Galaxy by his father to protect him from Emperor Tachyon. Growing up on Veldin, Ratchet longed to travel to new worlds and even built his own ship.

Shortly after completing his ship, Ratchet met a diminutive robot fugitive whom he dubbed Clank, who helped him to leave Veldin and fulfill his dream of travelling. From this point on, Ratchet and Clank traveled extensively through the Solana, Bogon and Polaris Galaxies, saving them on several occasions. 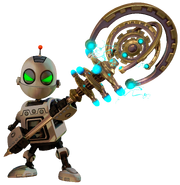 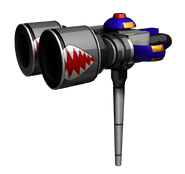 Mega Turrets (from the Miniturret glove)

Liquid Nitrogen Gun V5-Omega
Add a photo to this gallery

Retrieved from "https://deathbattle.fandom.com/wiki/Ratchet_%26_Clank?oldid=1009551"
Community content is available under CC-BY-SA unless otherwise noted.