She was a teenage girl who was launched into stardom after staring in Friday, a song known as "the worst song ever made". Her mother paid $4,000 for her daughter to star in the video. The video portrays Rebecca's day-to-day life; getting up, eating cereal, and waiting at the bus stop. She then sees her friends drive by, and they go to a party. Black is known for throwing wild parties and for being a Belieber, a huge fan of Justin Bieber. 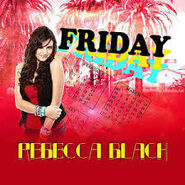 Rebecca Black with her hit song, Friday
Add a photo to this gallery

Retrieved from "https://deathbattle.fandom.com/wiki/Rebecca_Black?oldid=1073539"
Community content is available under CC-BY-SA unless otherwise noted.