Red is one of the main protagonists of the Pokémon series. He and his Charizard appeared in the 57th episode and Season 2 Finale of DEATH BATTLE!, Pokémon VS Digimon, where they fought against Tai and his Agumon from the Digimon series.

Red is the protagonist from the first Pokémon game, Red and Blue. He was originally a young trainer from Pallet Town who would go on to try and catch all 150 available Pokémon. In Origins, Red chose Charmander as his starter Pokémon and bonded with it over the course of his adventure, where he beat all 8 Kanto Gym Leaders, the evil organization Team Rocket, and his Rival Blue before taking on the legendary Mewtwo. After catching all 150 available Pokémon, Red and his Charizard resided on the top of Mount Silver, waiting for future trainers worthy of a challenge. 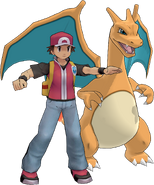 Retrieved from "https://deathbattle.fandom.com/wiki/Red?oldid=1041234"
Community content is available under CC-BY-SA unless otherwise noted.