Samuel "Sam" Fisher is the main protagonist of Tom Clancy's Splinter Cell series. He appeared in the 48th episode of DEATH BATTLE!, Solid Snake VS Sam Fisher, where he fought against Solid Snake from the Metal Gear series.

Samuel Leo Fisher was born in Towson, Maryland in 1957. Orphaned at a young age, he spent his youth at a military boarding school. His goal was to join the C.I.A. and follow in the footsteps of his late father. He joined both the C.I.A. and Navy Seals. During one of his missions, he had an affair with Regan Burns, leading to a failed marriage and the birth of their daughter Sarah. He was recruited by Third Echelon, a top-secret sub-branch of the NSA. Third Echelon wanted Sam for their new Black Ops unit, focused on infiltrating impenetrable locations, extracting information, and escaping even the most impossible scenarios. They called it the Splinter Cell program. He eventually discovered that Third Echelon was corrupt from within, he took it down by teaming up with Grim to create Fourth Echelon. 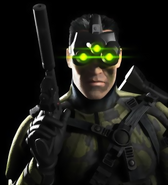 Sam Fisher holding his pistol and wearing his Multi-Vision Goggles

Sam's EMP
Add a photo to this gallery

Retrieved from "https://deathbattle.fandom.com/wiki/Sam_Fisher?oldid=1028219"
Community content is available under CC-BY-SA unless otherwise noted.