The Samurai from the Past

Kaiji Tang
I am the lost son of the land that you have pillaged! I am here to reclaim it, for my people, for my father, for my birthright!

A prince from feudal-era Japan, Jack was the son of an emperor who used an enchanted sword created by the gods to seal away the shapeshifting demon known as Aku. But when Aku was freed and enacted his revenge by conquering his home, the prince was sent to travel the world and undergo training before returning to his ruined homeland to receive his father's sword and end Aku. But before the prince could succeed, Aku created a time portal that sent the samurai into the hostile and lawless future that Earth has become under Aku's rule. Going by the name of "Jack", the samurai seeks a means to return to his own time and defeat Aku before his reign can begin, but Jack's attempts have been unfruitful for over half a century, with the effects of time travel preventing him from aging, the pressure of robotic assassins and constant guild-ridden torment making him question if his quest, and life, will ever truly end. 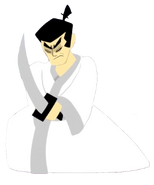