The uncle to Donald Duck and brother to sisters Hortense and Matilda McDuck, Scrooge McDuck was born to a poor Scottish family and lived a relatively normal life until his 10th birthday, where his father had taken him to see the remains of the old McDuck clan castle.

Inspired by the sight of the McDuck clan's former glory, Scrooge took up a job where he had earned his first coin: his number one dime. However, Scrooge soon discovered that his dime was an American coin, which was rendered useless, due to the fact that he was in Scotland.

Having felt cheated, Scrooge decided to move to America where he would build his fortune by being smarter than the smarties and tougher than the toughies, all while venturing around the world to search for countless treasures. His fortune has been totaled up to be as five multiplijillion, nine impossiblitillion, seven fantasticatrillion dollars and sixteen cents. 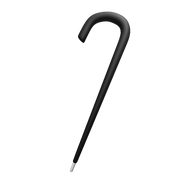 Scrooge with a cannon

Scrooge destroying a steamboat
Add a photo to this gallery

Retrieved from "https://deathbattle.fandom.com/wiki/Scrooge_McDuck?oldid=1072742"
Community content is available under CC-BY-SA unless otherwise noted.