Sephiroth is one of the main antagonists of the Final Fantasy series. He appeared in the 87th episode and Season 4 Finale of DEATH BATTLE!, Sephiroth VS Vergil, where he fought against Vergil from the Devil May Cry series.

During pregnancy, Sephiroth's mother was injected with cells from an alien being known as Jenova, which merged Jenova's cells with Sephiroth's unborn body. After birth, he was taken in and trained by the Shinra Electric Power Company to become a super soldier, and he eventually rose to the rank of a SOLDIER First Class and was celebrated as a war hero.

One day, Sephiroth, Zack Fair and a young Cloud Strife were sent on a mission to investigate a monster outbreak in Nibelheim. There, he saw humans mutated into monsters, and also a chamber with the name of his "mother" on it. In shock, Sephiroth tried to find the truth, which turned him insane. He came to the conclusion that he was the last Cetra, and that he must take vengeance on humans for their "betrayal" against the Cetra 2000 years ago. He slaughtered the people of Nibelheim and went out to claim Jenova's remains, but was stopped by Cloud and supposedly fell to his death.

He fell into the Lifestream, but his will was too strong to be consumed, so he spent years traveling through it and learning. After his body was rebuilt from fragments, his new goal became to merge with the Lifestream and become a god.

Sephiroth appeared in Season 2 of One Minute Melee, where he fought his DEATH BATTLE! opponent Vergil and lost.

He returned in Season 5, where he fought aginst Vergil again, which ended in a draw. 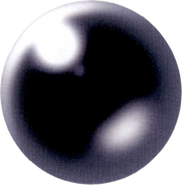 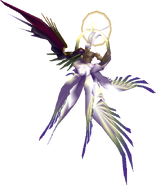 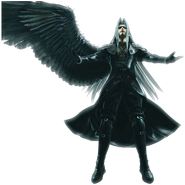 Sephiroth with his one wing

Supernova
Add a photo to this gallery

Retrieved from "https://deathbattle.fandom.com/wiki/Sephiroth?oldid=1049313"
Community content is available under CC-BY-SA unless otherwise noted.