Shang Tsung is an antagonist from the Mortal Kombat series. He appeared in the second episode of DEATH BATTLE!, Akuma VS Shang Tsung, where he fought against Akuma from the Street Fighter series.

Shang Tsung is a sorcerer from Outworld and a servant of Shao Kahn. Long ago, he was caught cheating in the Mortal Kombat tournaments, so the Elder Gods punished him by making him age swiftly until an untimely death, with the only way to prevent this being by absorbing souls. His skill almost had given him enough victories for Shao Kahn to take over Earthrealm, but he was stopped by his greatest opponent, Liu Kang.

Shang appeared in Season 4 of One Minute Melee, Fei Long VS Liu Kang. In the episode, Tsung faces off against Liu Kang and morphs into Street Fighter's Fei Long to change the tide of the battle. He is killed at the end of the fight, his head crushed into the ground beneath him. 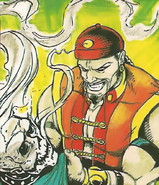 Shang Tsung sucking the soul out of his victim 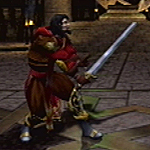 Straight Sword
Add a photo to this gallery

Retrieved from "https://deathbattle.fandom.com/wiki/Shang_Tsung?oldid=1077202"
Community content is available under CC-BY-SA unless otherwise noted.