Shao Kahn is the main antagonist of the Mortal Kombat series. He appeared in the 27th episode of DEATH BATTLE!, Shao Kahn VS M. Bison, where he fought against M. Bison from the Street Fighter series.

Known as Shao Kahn the Conquerer, he was assigned to the bleak realm of Outworld by the Elder Gods. Instead, he became the chief advisor to the Dragon King Onaga, who planned to take over the realms one at a time. Eventually, he poisoned Onaga, and took the realm of Outworld for his own.

Shao Kahn appears in the background of Black Canary VS Sindel, where he can be seen sitting on his throne, watching the tournament and announcing the fight. 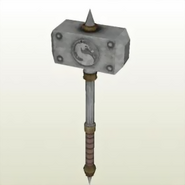 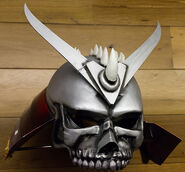 Double Down Fatality
Add a photo to this gallery

Retrieved from "https://deathbattle.fandom.com/wiki/Shao_Kahn?oldid=1009595"
Community content is available under CC-BY-SA unless otherwise noted.