William "Billy" Batson, AKA Shazam (originally Captain Marvel), is a superhero from DC Comics. He appeared in the 107th episode of DEATH BATTLE!, Captain Marvel VS Shazam, where he fought against Captain Marvel from Marvel Comics.

Billy Batson is a young orphan who went through several foster homes before he was spirited away by the Wizard of the Rock of Eternity, Shazam, to choose a champion pure of heart. The dying Shazam sees "embers of goodness" in Billy and passes his powers onto him which can be unlocked by the magic word, "Shazam". Whenever Billy says the magic word, he transforms into an adult-like super-powered being intent on saving the world. 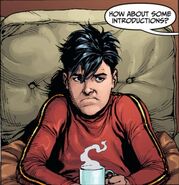 The Six Powers of the Gods

Speed of Mercury
Add a photo to this gallery

Retrieved from "https://deathbattle.fandom.com/wiki/Shazam?oldid=1083433"
Community content is available under CC-BY-SA unless otherwise noted.