Kenuichio Harada, AKA Silver Samurai, is a supervillain from Marvel Comics. He appeared in the 82nd episode of DEATH BATTLE!, Shredder VS Silver Samurai, where he fought against The Shredder from the Teenage Mutant Ninja Turtles series.

Born as the mutant, illegitimate son of a Japanese crime lord, Kenuichio Harada mastered the ways of the medieval samurai and became a ronin, a warrior for hire, and ultimately the bodyguard of the Hydra agent Viper. After his father's passing, he sought the leadership of his father's clan from his half-sister Mariko Yashida, but he was stopped by the ronin Yukio and Mariko's lover Wolverine.

After Mariko's death, he became the leader of the Clan Yashida, and, to protect Japan, even became a member of Japan's first superhero team, the Big Hero Six. In the end, his inability to lead the Clan Yashida allowed a Mongolian crimelord to take it over, and while he took the clan back with the help of Wolverine, the disgrace of losing leadership made him return to his mercenary ways.

Silver Samurai's corpse can be seen in the background during Boa Hancock VS Rider Medusa. 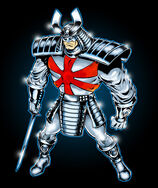 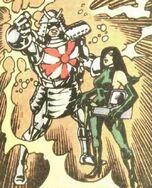 Teleportation Ring
Add a photo to this gallery

Retrieved from "https://deathbattle.fandom.com/wiki/Silver_Samurai?oldid=1074258"
Community content is available under CC-BY-SA unless otherwise noted.