During World War II, most men were needed at the front and weren't able to help fight forest fires on the West Coast. Because of this, campaigns were started to educate citizens about the danger of forest fires, in an effort to prevent forest fires to start in the first place.

Then, one fateful day, a forest fire broke out in New Mexico, incinerating almost everything in it, with the exception of a small black bear cub that clinged itself onto a tree. While said cub suffered burns, it was rescued and later fittingly named Smokey. The young cub was eventually brought to Washington DC, where it would become the symbol of fire prevention.

Ever since he became a legend, Smokey helped to educate children and adults alike about the importance of the forest and about safety when handling with fire in the nature. 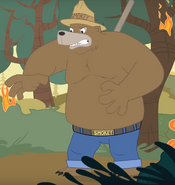 Smokey increasing his size
Add a photo to this gallery

Retrieved from "https://deathbattle.fandom.com/wiki/Smokey_Bear?oldid=1063185"
Community content is available under CC-BY-SA unless otherwise noted.