Solid Snake is the main protagonist of the Metal Gear series. He appeared in the 48th episode of DEATH BATTLE!, Solid Snake VS Sam Fisher, where he fought against Sam Fisher from Tom Clancy's Splinter Cell series.

David was a former spy, special operations soldier, and mercenary. He was a product of the Les Enfants Terribles project; one of the clones of legendary soldier Big Boss, along with his clone brothers Liquid Snake and Solidus Snake.

Possessing an IQ of 180 and being fluent in six languages, he was known as "the man who makes the impossible possible" and his exploits made him into a living legend among the military black ops. Initially a Green Beret, Snake was later inducted into High-Tech Special Forces Unit FOXHOUND in the mid 1990s while it was under the leadership of Big Boss. Repeatedly tasked with disarming and destroying the latest incarnation of Metal Gear, a bipedal nuclear weapon-armed tank, Solid Snake would thrice avert potential nuclear catastrophe, becoming a famed war hero.

Snake appeared in Season 4 in One Minute Melee, where he fought against Chris Redfield from the Resident Evil series and won. 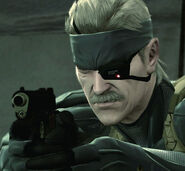 Old Snake
Add a photo to this gallery

Retrieved from "https://deathbattle.fandom.com/wiki/Solid_Snake?oldid=1042194"
Community content is available under CC-BY-SA unless otherwise noted.