Lawrence Simpson
I am the hope of the universe. I am the answer to all living things that cry out for peace. I am protector of the innocent. I am the light in the darkness. I am truth. Ally to good; nightmare to you!

Son Goku (born Kakarot) is the main protagonist of the Dragon Ball series. He appeared in the 25th episode and Season 1 Finale of Death Battle, Goku VS Superman, as well as the rematch in the 50th episode, where he fought against Superman from DC Comics.

Born from a low-class warrior named Bardock on Planet Vegeta, Kakarot was a member of the war-like alien race known as the Saiyans. Shortly after being born, he narrowly escaped the extinction of his entire race as an infant when he was sent from a space pod to Earth with the mission to wipe out the inhabitants and conquer the planet. A kind old man named Gohan soon found him and took in the young Kakarot, renaming him as "Son Goku". He was quite a vicious child until he hit his head after falling in a ravine, giving him amnesia and erasing his natural-born Saiyan bloodlust. As Goku grew, he also developed a love for fighting and adventure, traveling the world in frequent search of the legendary wish-granting Dragon Balls, as well as to train and fight against strong opponents. Trained by legendary masters and god-like beings, Goku became Earth's protector against all that come its way, be it aliens, androids, mystical entities, gods, or even his own race. To this day, he still trains hard and strives to be the greatest warrior possible, while at the same time using his amazing strength and skills to uphold peace.

During the final clash between the martial artists in Chuck Norris VS Segata Sanshiro, Goku in his Super Saiyan God form is briefly seen fighting Superman, foreshadowing the rematch in the nearby future.

The teaser from the Boba Fett VS Samus Aran (2015) livestream where Goku is seen charging his Super Saiyan God form is briefly seen in Solid Snake VS Sam Fisher on the computer Sam Fisher is hacking.

In Hercule Satan VS Dan Hibiki, when Mr. Satan starts panicking as Dan Hibiki charges his Shinku Gadouken, he briefly sees Dan as Goku charging up his Kamehameha to remind the audience of his fear of chi users.

During Deadpool VS Pinkie Pie, a figure and Funko Pop figure of Super Saiyan Goku can be seen in the background on the set of DEATH BATTLE! Cast during Deadpool's invasion of the show.

For an article covering Goku's appearance in DBX, visit the DBX Wiki.

Goku made a brief cameo in Ronald McDonald VS Colonel Sanders, he's seen sitting behind Wario at a McDonald's.

He made a cameo in the Season 4 Premiere, Gohan VS Superboy, where his spirit appeared alongside his son to reenact the famous Father-Son Kamehameha that Gohan uses to finish off Superboy.

He later made another cameo appearance in the beginning of the Season 4 Finale, Batman VS Iron Man, where he can be seen in the crowd during the auction.

Kid Goku appeared in Season 5 of DBX, where he fought against Gon Freecss from the Hunter × Hunter series and won.

He made a cameo in the Season 6 Premiere, Gogeta VS Vegito, where he and Vegeta as well as a second Goku and Vegeta fuse into Vegito and Gogeta, respectively. 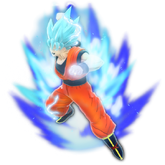 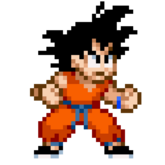 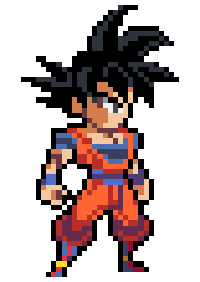 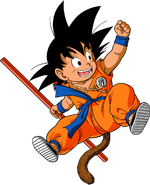 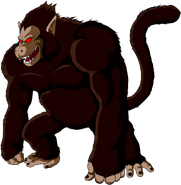