Sonya Blade is a protagonist from the Mortal Kombat series. She appeared in the 65th episode of DEATH BATTLE!, Cammy VS Sonya, where she fought against Cammy White from the Street Fighter Series.

A general of the Special Forces, Sonya joined the 10th Mortal Kombat Tournament to hunt down Black Dragon leader Kano, who killed Sonya's partner. She would later join Raiden's Force of Light with her Special Forces alongside her new partner Jax, and fight to protect Earthrealm from Outworld and NetherRealm forces. She would later be part of the Outer World Investigation Agency, a task force focused on other realm exploration and combat.

In the rebooted timeline, Sonya was one of the only defenders who survived Shao Kahn's assault of Earthrealm. She fell in love with her teammate, action movie star Johnny Cage, and they eventually married and had a child named Cassie. Johnny later divorced Sonya as she was too devoted to her job to spend time with her family. 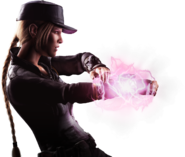 Inverted Bicycle Kick
Add a photo to this gallery

Retrieved from "https://deathbattle.fandom.com/wiki/Sonya_Blade?oldid=1027909"
Community content is available under CC-BY-SA unless otherwise noted.