Sora is the main protagonist of the Kingdom Hearts series. He appeared in the 92nd episode of DEATH BATTLE!, Sora VS Pit, where he fought against Pit from the Kid Icarus series.

A boy who lived on Destiny Islands with his friends Riku and Kairi, Sora ended up embarking on a grand adventure the night his home was attacked by the Heartless. During this, he obtained a weapon called the Keyblade. After his world was swallowed by the darkness, he found himself in Traverse Town, where he met Donald and Goofy. With the Keyblade and the help of his new friends, Sora protects the worlds from the Heartless and other threats presented by Maleficent and Master Xehanort.

Sora appeared in Season 2 of One Minute Melee, where he fought against Link from the The Legend of Zelda series and won. It was revealed afterwards that Dark Link had been possessing him. 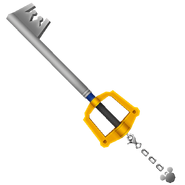 Using Electricity
Add a photo to this gallery

Retrieved from "https://deathbattle.fandom.com/wiki/Sora?oldid=1057734"
Community content is available under CC-BY-SA unless otherwise noted.