Albert "Al" Simmons, AKA Spawn, is the main protagonist of the series of the same name. He appeared in the 10th episode of DEATH BATTLE!, Kratos VS Spawn, where he fought against Kratos from the God of War series.

Special Forces Al Simmons was a skilled assassin. He proved time and time again that he was the best of the best. But until the morality got the better of him, his boss terminated his contract permanently (the official way of stating that he killed him). After being sent to Hell for his crimes, he met the demon Malebolgia, who made a deal with him. If Al agreed to become captain of Hell's army, he would be reborn to see his wife again. He agreed and was reborn as a Hellspawn. But eventually, the demon tricked him, and Spawn was left with a fate far worse than death. From that day, Spawn swore revenge and has become one of the most dangerous Hellspawn in history.

Leetha of the 7th House of K

Spawn appeared in Season 1 of DBX, where he fought against Alucard from the Hellsing series and won.

Spawn reappeared in Season 4, where he fought Venom from Marvel Comics and won again.

Al Simmons before his death 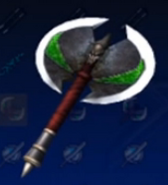 Necroplasm
Add a photo to this gallery

Retrieved from "https://deathbattle.fandom.com/wiki/Spawn?oldid=1072737"
Community content is available under CC-BY-SA unless otherwise noted.